When Joanna Campbell plunked Moe down in the Thoroughbred Series out of her real life I was okay with that. When Karen Bentley erased Cindy's less annoying personality and replaced it with her own, that really pissed me off. In The Horse of her Dreams, Allison Estes tossed Maureen Mack into the fold, and in this book Cassidy Smith moved from her home in Florida to muck up the lives of our charmingly obtuse characters. I can't help but think that as Allison wrote this book, she was thinking: "Now I will surely be Cassidy's most favorite aunt! Who else would pander to a child's ego so effectively? No one, that's who!"

So I find it curious when the authors stick real people in these books, making it incredibly easy to cyberstalk those they were so eager to please by immortalizing them in print. Although, really, that's not the issue here. It's our wonderful fictional characters and their reaction to our most recent real life implant, Cassidy, that makes the story. To the cover! 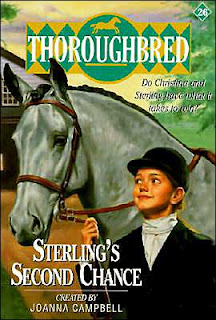 Does Christina have the heart of a champion?
Christina Reese is sure she and her new horse, Sterling Dream, are ready for their first competition. Then Christina is injured in a fall and loses both her nerve and her spot on the team. Someone needs to ride Sterling, or the team will be disqualified.

When beautiful, self-confident Cassidy Smith is picked to ride Sterling in the show, Christina tries to be a good sport. But it's not easy. Cassidy is claiming that both Christina and Sterling are quitters. Will Christina and her horse get the chance to prove just how wrong Cassidy is?

The thing about this blurb is that the whole second half of it never happens. I don't know how exactly this whole blurb process works -- if the blurb is written before the story or the story is written before the blurb, but it is very clear that someone wasn't in line. Cassidy Smith isn't "picked" to ride Sterling and Christina and Sterling don't set out to prove anyone wrong. Basically, the whole book is about Christina acting like a paranoid freak of nature, which brings me to the title. This thing should be called Christina's Second Chance or Sterling Gets Annoyed With Her Bipolar Rider, because Sterling's Second Chance implies that the horse was doing something wrong at the beginning of the story when really she was just behaving as any horse would when a complete lunatic is sitting on its back.

Sterling is so great! She's been off the track for weeks and is training fantastically for her super shiny career in (E)venting, so Christina is all besides herself with glee only she is also crippled by a very annoying inability to treat the horse like anything other than Waterford crystal. Picking up on this, Sterling starts to test her limits and Christina isn't prepared for Sterling's moody shenanigans. But why would Sterling decide to test Christina's awesome magical riding ability? Isn't Sterling supposed to be Christina's uber special mare she's waited her whole twelve years for? She just does. not. get it!

So the issue is that Sterling keeps ducking out and refusing to take jumps. Mona's solution to this is relatively simple: a) carry a crop when you ride and b) hit the damn horse with the crop when it does something you don't want it to do. When Christina hears this stunningly realistic logic she immediately does our typical Thoroughbred character whining about abuse and how she promised herself she'd never hit poor Sterling with anything ever because Christina isn't an ugly backside groom with bad teeth, she is a horse riding princess! Hitting her wonder horse is beneath her! Sterling should just magically know what Christina wants, or so she thinks. It doesn't work out that way, so for the first three or four chapters of the book they basically wrestle each other in a truly stunning display of horsemanship antics that can't possibly hope to be followed. Mona gets annoyed with this and tells Christina to get off the horse. She's going to teach the mare something, and Christina's all weepy and tells Mona not to hit Sterling and Mona's all "yeah, whatever."

While Mona's off perfectly riding Sterling, Christina takes some time to feel offended, angry and instantly suspicious of our new character, Cassidy. Cassidy is perfect, and has already won at the National Horse Show, which Christina is instantly jealous of to the point that she decides Cassidy is lying. So Mona shows back up to make Christina ride Sterling again, but Christina is too busy convincing herself that Dylan and Cassidy are holding hands to pay much attention to the water jump she's supposed to be jumping which ends in disaster. Mona tells her to get off the damn horse because Christina is acting like a loon, but Christina ignores her and tries it again and fails even more miserably. She falls off the horse and actually breaks her wrist and boo hoo she's hurt for the first time ever.

Christina has to have a cast for two weeks, which is the end of the world because she can't ride. Since Christina has no other hobbies and is remarkably two-dimensional, you can imagine how awful this is for her. So it comes up that someone has to ride Sterling to keep her in training, and Mona instantly suggests Cassidy because she's just great and everyone loves her, much to Christina's agitation. Like hell that perfect girl is going to ride Christina's supposedly once perfect horse! She essentially tells Mona this and proceeds to ask everyone else she knows, and everyone else tells her they're busy because they all have lives outside of horses, leaving Christina in her two-dimensional world with no horse to ride. Only then she finds out that Dylan and Cassidy are going out to the movies together, and she hates Cassidy even more. That sort-of boyfriend stealing slut!

But never fear, Melanie is to the rescue. Despite Christina's completely annoying insistence that no one knows Sterling like she does and whatever else, she finally relents and lets Melanie groom the mare before she makes Melanie exercise her. Then there's another episode of shrieking and shooting looks at people and Sterling bolts around the paddock with Melanie clinging to her neck as Cassidy steps in to save the day for our two heroic and yet completely clueless main characters. Melanie's had it after Christina's shrieking fit and leaves, so now Christina has no one to ride her super precious persnickety mare...until she comes to the stable the next day to see Cassidy riding Sterling! Holy hell! How dare they, everyone and Sterling for letting that sort-of boyfriend stealing girl get on her back like that! Everyone is at fault except Christina, or so she thinks, as she has visions of dragging Cassidy off the horse. Cassidy, having a heightened sense of self preservation, gets off the horse and lets Christina haul Sterling back to the stable.

So, just as it's become stunningly apparent that Christina has lost it entirely, Melanie rides to the rescue again and tells Christina she has to let Cassidy ride the horse if she's going to enter this Foxwood event thingy when her cast comes off. Christina swallows her pride and calls Cassidy up, apologizes for her insane behavior, and Cassidy tells her she just can't help because she's still unpacking from moving or something incredibly made up. I don't blame her for not wanting to ride...we're dealing with an unbalanced twelve-year-old girl here and there's nothing more frightening. Dejected, Christina goes to mope with Sterling. Then Cassidy has her random change of heart and decides to ride. Just like that, everything is super fantastic again!

Only then Christina's cast comes off and she's paralyzed with fear. She just can't ride Sterling and insists that Cassidy ride in the show instead. Everyone seems to wait for her natural outburst, but when that doesn't come they know something's really up and go about secretly plotting to make Christina ride in the show. Their plot is revealed at the absolute last second, and it all works out because Cassidy wears the same size as Christina. Marvelous! So they force Christina onto the horse at the show, she rides around like she's on acid or something equally hallucinogenic, and finally has to use that crop she's been freaking out about and wins the show because she's a super riding princess and it's a given. Then Dylan kisses her on the cheek and the nervous butterflies in her stomach become joyful butterflies, but no one notices, thank God.


That is all here. I'll be back with Christina's Courage next, and a few other books that involve perfect thirteen-year-old girls riding magnificent horses and fixing everyone's lives and whatnot. Good times will be had by all, I'm sure.

mara, your review inspired me to reread this book. christina was pretty atrocious, but i pretty much forgive her for how awful cassidy was. lord, what an annoying character! mary sues abound, seriously. but really, after rereading the first three newgen books written by estes, i think she had it out of christina. there is nothing admirable about her character, ever. instead she whines and cries at every opportunity.

Sterling has the neck of an Andalusian stallion on this cover. she looks nothing like the skinny, just-off-the-track filly she actually is.

Christina didn't bother me so much in the first, oh, 3/4 of #24. By the time she was crawling around in the rafters in one of the Belmont shedrows, she'd gone from somewhat interesting to annoying in the span of a chapter.

Cassidy is a ridiculous mary sue. She is perfect. She's like a Suave commercial, for Christ's sake. And Christina's the other girl that paid too much for Herbal Essences. You know? (God, is that commercial still aired?)