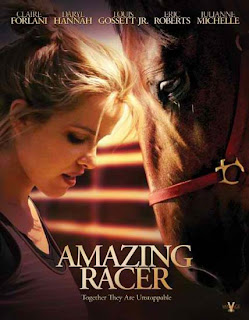 Every so often, a movie comes along that tempts me back into blogging. A movie so inspiring, so awkward, so full of fake tears and melodrama, that I am forced to act. That movie is Amazing Racer. Or Shannon's Rainbow. I'm not sure why they changed the name, but that's probably your first clue.

We begin this fine tale in Florida, because it is crazy and that is where crazy things live. Shannon wakes up in a hospital, and we quickly learn that her father has passed away and there is some concern that Shannon's recent "accident" was "intentional." It totally was not, because she was too busy "crying" and driving at a fire hydrant because her uncle's wife yelled at her for picking at her food and it is uncle's wife's way or NO WAY. That spoiled orphan! NO ONE LOVES YOU, SHANNON. NO ONE.

We are then immediately informed that Shannon is the product of a teen union gone horribly awry. Shannon's dad's family absconded with Infant Shannon and told Shannon's mom's family that Shannon died. Somewhat Older Shannon was informed that her mother died when she was Infant Shannon. Who is confused? Even Therapist Daryl Hannah is like, "Wow, this is like a TV movie!" Oh, Daryl. We are just getting started.

Shannon's mother, Christine, is a pediatric surgeon or something living in Pittsburgh. So she flies down and gets Shannon, immediately tells her that no one really wants to deal with this situation because dude, this is ridiculous, but promises Shannon that they will give this a shot over the summer and if Shannon doesn't like it she can go back to Florida and live with her uncle's crazy wife who hates her. Awesome options! Anyway, they go back to Pittsburgh and Shannon goes from weepy teen to instabitch for no apparent reason and then yells at Christine about how her problems are worse than hers and Christine is like OH, ARE THEY? So Shannon shuts up.

But Christine has a horse, and her boyfriend owns a horse farm, and Christine wants Shannon to see the farm and Shannon doesn't want to because horses are horrible and this is a smoke screen. Shannon loves horses. Shannon's dad loved horses. Everyone loves horses. But Christine makes Shannon take a shower and go to the farm, so Christine can "race" her horse for thirty minutes or something and then proceeds to get in a sulky and gallop a Standardbred around in a circle.

It's that kind of movie. Who is excited?

Shannon pretty much immediately gets caught trying to make out with an unnamed filly and is lassoed into a job at the farm. Christine's boyfriend has an amazing heart to heart with her after he's tried to get her "behind a horse" in which he guesses that "you were on a horse when you found out (that your father died)!" And then he said, "Ohmigod, your mom was on a horse too when she found out (that you "died")!" And Shannon is now too confused to cry because what the hell? Who makes random conclusions like that? But anyway, this is why they both refuse/refused to ride. Only some light badgering got them to stop being traumatized.

So then Shannon and Christine separately admit that they hate Shannon's dad and there is yet more crying, followed by a montage of memories, which means that now Shannon can start smiling occasionally and "get behind a horse." This means that Shannon is handed the filly she tried to make out with and christens her Rainbow, because of course. Then they race and Rainbow is "something" and everyone group hugs except this random dude who looks uncomfortable.

THEN. We cut to the Evil Owner character shooting clay pigeons with a shotgun in front of his mansion as Stanford Blatch yells, "That's 9 out of 10!" and presents him with alcoholic beverages. Evil Owner's wife tells him all about how awesome Rainbow is and he laughs menacingly and racks his shotgun.

Meanwhile Rainbow comes in third in her maiden race because Shannon wasn't racing her and therefore there was not enough love to motivate her. In the next race, Rainbow is claimed by Evil Owner, who sneers at them and asks if they know what a claiming race is. Boyfriend offers him $40,000 and yells "What do you want!" Evil Owner says, "Payback."

So now we know who the smart characters are in this movie, as Stanford Blanch literally pries Rainbow out of Shannon's grip as she yells, "SAY HER NAME, STANFORD! SAY IT!" There is  more crying and collapsing in stalls. Evil Owner tells his trainer to make Rainbow forget the girl and mutters that the horse is weak. So Shannon relaxes in a hammock as Rainbow bolts around in a panic. Odd juxtaposition, but okay.

Evil Owner's wife suddenly feels bad and says they should take the horse back and Evil Owner is all I WOULD RATHER IT DIE. Then he tells Stanford to kill the horse. Poor Stanford isn't getting a lot out of this relationship. So the wife gets Christine's boyfriend to intercept the moronic...veterinarians?...and buys the horse for $400 after Steve Guttenberg can not understand negotiations. So, hey, at least Idiot Boyfriend Character saved $39,600.

Then Christine yells at someone named Max, who is drunk, but apparently will save Rainbow who, after about two hours in Evil Owner's possession is at the brink of death. A night goes by and Rainbow has a full recovery from her phantom near death problem.

No, really. And who the hell is Max, again? Anyway, I think he's sober now. Random dude (who is he?) who looked uncomfortable before is all, "Hey, Max and Rainbow!" Like they've been together forever. Later on, in some fit of paranoia, Max shows up at Christine's and is all "You have a spy! Evil Owner knows I'm working for you, or whatever I'm doing. WHO COULD IT BE? I'M OUT OF HERE!" And Christine is all, "Yeah, you gonna run? Are you a pussy, Max? Huh?" So she's finally like, "Oh, whatever."

Stupid Boyfriend makes Shannon the jockey for Rainbow's next race, the Pennsylvania Cup, because she's suddenly good enough and not an untested maiden or anything. Shannon finds Max passed out in Rainbow's stall (not surprising) and castigates him for not helping her. Max tells her some story about everyone's back story and apparently Evil Owner doesn't want Stupid Boyfriend to win the Cup. Ever. We have to take Rainbow to another farm and run Rainbow "fast and hard" and no one can know! Running fast and hard to Max, by the way, is trotting slowly in an arena. Then he explains basic racing strategy that everyone knows already as he is backlit by the sun and someone sings in the background and it is EMOTIONAL. FEEL THE EMOTION.

Then STUPID EFFING BOYFRIEND lets the random nameless dude know that Rainbow is up the road training in secret so no one will know, and then I guess says, "HAHA, CAUGHT YOU, DIRTY SPY." I don't know if this was a trap? He didn't catch him doing anything other than ask where the horse is so...in any case, nameless dude calls up Evil Owner and lies and I guess things are cool now. Or...oh, who cares.

Now everyone voice overs to montage and Evil Owner's Wife cries some more as Evil Owner says something cryptic and walks around with most of his shirt buttons undone. I can't tell if this is foreshadowing or what, because Evil Owner is arrested at the race for, as the cop says, "attempted murder, conspiracy...well, just a whole bunch of stuff." Miranda Rights they most certainly aren't.

I do, too! Thoroughbred #70 still hasn't been reviewed, and I really want to read Mara or someone else's take on that book! Please complete the series! Pretty please!

why no more updates??? :( pretty plz i love tehm so much