The Hallmark Channel, you guys. Check it out occasionally. 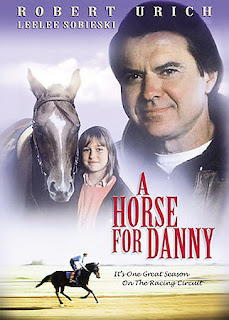 Tagline: It's one great season on the racing circuit.

An eleven-year-old girl falls in love with a chestnut horse and success soon follows! Where have I seen this before? Let me think. It will come to me eventually...oh, wait.

You know, this movie isn't as horrible as I remembered it being. It's sort of like Dreamer with a young Leelee Sobieski instead of a young(er) Dakota Fanning. Danny is an orphaned girl living with her uncle, Eddie. They live in a trailer in the backside of Ellis Park, and young Danny spends most of her time spying on the work outs, using her findings to hone her handicapping skills. I couldn't help being impressed by this beginning, because I really didn't expect the main character to be an eleven-year-old handicapper. However, it gets a little out of hand, especially when she wins the Pick Six (yes, the Pick Six) in her efforts to raise enough money to claim the resident chestnut colt, Tom Thumb.

I do not like that name, but it's better than many things that have been thrown at me in the past. Regardless, Danny is smitten with Tom, and manages to convince her uncle to go to an Ohio track to claim him. This sets issues rolling all over the place. Once the colt is claimed, the owners have the nerve to be offended about it, launching a campaign to wow Eddie and Danny into selling the colt/giving up their nickle and dime public stable operation to work for them. Because Eddie and Danny are morally superior they initially turn them down, although Danny, in her penny pinching way, worries over the $50,000 check the previous owner gives her just long enough to cause some chaos.

Tom Thumb becomes quite the winner, but someone doesn't want him to keep up his splendorous ways. A hit man encased in black leather is dispatched to make sure the colt doesn't win again, in various ways that hit a high note with his beating an assistant starter unconscious and taking his Keeneland baseball cap and windbreaker. Then, black leather guy somehow weasels his way into the position of holding Tom Thumb's head before the break.

A lot of this starts to raise some questions. Namely, am I seriously supposed to believe the rest of the assistant starters wouldn't realize what's going on here? Also, would a racehorse allow itself to be held back at the start? Also, where does this guy think he's going after being so blatantly shifty about fixing a race in front of just about everyone?

Well, these questions are not answered because Tom Thumb bows a tendon despite winning. Danny pitches a fit, someone calls her a selfish brat, and this is all forgotten when they discover black leather guy getting paid off after he somehow manages to get back to the stables. The police come along, because this is Serious Business.

But, hurrah! They win and Tom Thumb is on his way to a speedy recovery.


My overall opinion is that there is no reason for anyone to view this more than once. If you've reached that quota, you're good for life. Next up, I'm going to try watching more Heartland. I've also got The Georges and the Jewels by Jane Smiley coming up soon. Then we'll get into Thoroughbred again, I promise.
Posted by Mara at 10/20/2009 01:25:00 PM

I was an awesome handicapper around that age. My dad would show me off to his drinking buddies. I guess that's what happens when your horse-crazy kid sits watching the OTB channel after school...