The First Saturday in May 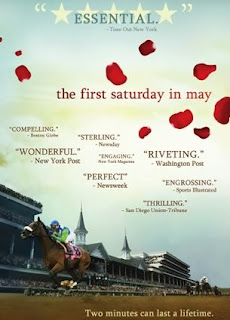 The First Saturday in May
2007
Tagline: Two minutes can last a lifetime.

So here's the deal: two brothers drop everything for over a year to follow these guys (and these horses): Michael Matz (Barbaro), Dan Hendricks (Brother Derek), Bob Holthus (Lawyer Ron), Dale Romans (Sharp Humor), Kiaran McLaughlin (Jazil), and Frank Amonte Jr. (Achilles of Troy) on the trail to the Kentucky Derby.

It's interesting to watch this a few years removed from the 2006 Kentucky Derby, knowing the stories of what happened to these horses after the Triple Crown trail. For instance, Barbaro and Lawyer Ron are both deceased, Jazil won the Belmont Stakes and that was pretty much all, Brother Derek and Sharp Humor suffered injuries and faded into stud duty, and Achilles of Troy probably has the saddest story of them all. Poor Achilles completely disappeared, and only rumor puts him in poor condition at Aqueduct days after the 22 counts of abuse were filed against his owner in April of this year.

But those stories could not be part of The First Saturday in May, although I think it would have been fascinating had they touched more on why Frank Amonte Jr. got the head trainer job with Achilles of Troy just before the Gotham, considering it was the last race Achilles of Troy was ever in. The only story they follow up on is Barbaro, for obvious reasons.

The documentary itself is much better than I thought it would be. In short, it isn't an overlong, overproduced montage in the same vein of the kinds you see during the Triple Crown broadcasts. It's realistic. Some of these guys are the type to drink whiskey straight from the bottle while playing golf, some of them curse up a storm, and some of them really are just straight-laced family guys. It was sweet to watch Michael Matz teach his son about approaching a horse with confidence (plus, I am sort of in love with Michael Matz), and I did enjoy watching Frank Amonte accost his son for complaining that the dirt they're standing in might ruin his new shoes.

What with the 2006 Triple Crown being so tragic in the case of Barbaro, I was curious to see how they handled the aftermath of the Derby. I am a person who went on Barbaro overload about two and a half years ago. Granted, I always kept up with what was going on with him, but now I just want to move on with my life. If this documentary had been made any other year, it would have skipped straight to the "here's where they are now" section and called it a day. Because it happened in 2006, they give us a two minute Barbaro clipshow that I am almost certain could have felt less pieced together. However, for the purposes of showing how important the Kentucky Derby winner is to American sport, I suppose it works.

In all, I thought it was well done. I sort of want to buy it, but I'm restraining that impulse.

I don't have a single sarcastic thing to say about this documentary. I honestly loved it - saw it in the theater before the 2008 derby, and made my partner watch it with me this year before the 2009 derby. I love getting the stories of the people involved - the grooms, the crazy Romans family, the random hysterical kids. The only person who came off as boring was ... Michael Matz, and I say that even though I want to have his babies. He and his family came off as really yuckily wholesome. Also, the part about Nicanor is sad, in light of how well that's gone...