Every girl loves a golden horse, of course.

I coveted this book as a child. It was always listed in the back of the Thoroughbred books on that little order form that you could fill out to buy books directly from the publisher. Finding it was an obsession for me, not just because it was related, however remotely, to the TB series, but because it was called The Palomino. What horse crazy young girl doesn't love palominos, after all? I don't know exactly what story my young brain concocted about this book, but when the wonders of Amazon.com's used bookstore finally allowed me to purchase and read this book as a teenager, I was sorely disappointed and chucked it on my shelf, vowing never to read it again. So I guess this counts as breaking my vow. 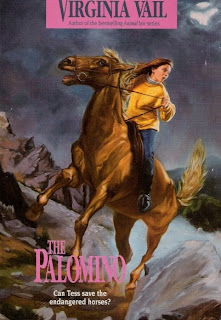 Only Tess can rescue her beloved horse, Ariel.
Tess Sherrill is thrilled when her uncle turns down a developer's offer to buy his stable, The Barn. Without The Barn, Tess wouldn't be able to ride her favorite horse, a palomino named Ariel. but Tess's happiness fades when The Barn is plagued with freak accidents that threaten the lives of the horses boarded there. It is sabotage?

Tess vows to stop whoever is behind the destruction. then Ariel and the other horses are injured in a dangerous stampede on the night of The Barn's annual Harvest moon trail ride, and Tess's uncle is ready to give up. Can Tess uncover the criminals before her uncle sells out - or worse, her cherished horse is hurt too badly to save?

I wonder what reading this book would be like if I had any childhood memory of it. Further, I wonder if I would have liked this book as a child. My immediate instinct upon finishing the book this go-round was not to chuck it across the room in a fit of disgusted fury, like it was when I read it the first time, but the whole thing left me feeling vaguely unsettled. Probably because the main character, Tess, is unbearable in many ways, though when it boils down to it I suppose she's not as bad as Christina and her ilk.

Remember when I said that as a small girlchild I loved palominos? Well, that's basically the premise of this book, or at least where it begins. Tess loves working for her uncle on his farm, The Barn, which exists to board horses and give trail rides to tourists. Unfortunately, Uncle Matt is a black sheep in the Sherrill family, who own a local department store. Tess's dad, mother, and for some unfathomable reason her older sister, all hate Matt because he won't sell the farm and go work in an office for the department store. Apparently they all find this to be really embarrassing, more than anything else. These people are really damn annoying. We're supposed to sympathize with Tess and find their views untenable and all, but the way Vail writes them as they blather on and on about how crazy Matt is they are just insufferable in a way that transcends character development and moves into the overdone melodrama department that had me almost setting this book on fire a scant two chapters into the book.

But I digress. Tess is just finishing up her first summer working as a trail guide for Uncle Matt when a nervous little man arrives and leaves a horse to board with Matt for three weeks. This horse is the aforementioned palomino, a delicate little mare who makes Tess go weak in the knees. This mare's name is Golden Dawn (nice) or Goldie (retarded) for short, but Tess immediately rechristens this mare Ariel. Why? You see, this mare perfectly resembles a palomino model horse Matt gave Tess as a child whom he told her was named Ariel. This horse was super special, and because Tess has owned plastic Ariel for so long, she now immediately decides that this palomino mare who lives, breathes, and poops, is hers. That's really the way it goes, I'm not making this up. Even though they have just met and the mare belongs to someone else, Tess knows this horse is hers and they are soul mates. It's really quite appalling - not even Christina was that quick to decide she and Sterling were similarly bonded.

Back at home, Tess has dinner with her family and her sister's boyfriend, Edward Brewster, who is the son of a local real estate magnate. Turns out that Mr. Brewster is going to offer to buy The Barn because he wants to build a giant mall or suburb or something, I don't know. Tess is appalled but not too worried - she knows Matt won't sell, especially because tearing down the barn would mean destroying the environment. This was the early 1990s, after all. I'm pretty sure Earth Day had just been invented. By the way, Matt also grows all his own food or something, and even powers his house with solar panels on the roof, so really Vail was just eons ahead of her time in terms of environmental/healthy living messages implanted in children's books. But it's okay kids, he does have a telephone.

There are some secondary characters I should mention, too. Lydia is Tess's best friend who is so boy crazy she's like a cat in heat. She doesn't like horses but starts working at the barn with Tess after developing a huge crush on Matt's stablehand, Zach who, you guessed it, Tess hates until she realizes (at the end of the book) that, hey, penises are fun too.

To get back to the main plot, Matt does refuse Brewster's offer, just as suspected. While he's off doing this, a biker gang (yes, a biker gang) comes to The Barn to rent horses. They are really bad ass because they have studded jackets and wear their motorcycle helmets instead of riding helmets on the horses. They generally act like jack asses on the trail ride and Zach beats one of them up, and so they threaten their revenge, hence we have a ripe old red herring that not even the characters believe carry out later crimes.

Because, you see, someone gets really pissed off that Matt refused to sell his land, and we have a beavy of suspects. There is, of course, the biker gang. There's also a really creepy family called the Putnams who live next door to Matt. Brewster would have bought their land, too, but won't if Matt doesn't sell, and because they're poor inbred hicks they are generally pissed off about this situation. Then there is Joanna Talley, whose father owned a successful barn until Matt successfully charged him with horse abuse. And then he died or something, so I guess Joanna is out to avenge her dead father. Then there is Edward, the boyfriend, who is perhaps trying to impress his father. I admit that I got tricked and fell for this one, but I am generally terrible at mysteries no matter how horribly written. So.

Anyway, the mystery vandalizer is quite adamant about scaring Matt off. When Matt leads an annual moonlit trail ride, someone shoots at the horses from the bushes. No one is hurt, of course, but Tess is all pissed off because what if one of the bullets had struck her precious palomino???? Joanna Talley emerges from the woods on horseback after, saying she heard gunshots and wants to make sure everything is okay, so Tess naturally suspects Joanna is the culprit. But when she rides over to Joanna's farm she basically discovers Joanna and Matt fucking. Turns out they're getting married. Oops, guess not.

Then someone let's all the horses out of The Barn and because all of these horses are really stupid they run around and generally injure themselves terribly. One has to be put down and Tess's precious Ariel runs into a giant piece of rusty farm equipment and gouges a giant cut through her pretty coat. After this incident Matt's clients get really upset, and Tess decides that it was Edward who let all the horses out, so she gets all up in his face at Matt and Joanna's engagement party just as someone else lights The Barn on fire. Don't worry though, fire extinguishers are enough to put out this fire that is apparently about to engulf some hay, and we have caught the culprit, one of the Putnam Boys, who was angry because he wanted to be able to afford a motorcycle.

So The Barn is saved, except for Matt decides to sell it and move in with Joanna. Screw you, environment. Also, Matt buys Ariel for Tess so now she does actually own her perfect prissy princess horse. Finally, when she's dancing with Zach she feels a boner pressed into her leg for the very first time and realizes that boys are people too. The End.

Points of Interest:
And there you have it. This book is really more teen mystery/romance than horse book. Tess's creepy and obsessive adulation of Ariel instantly reduces her to about 9 years old every time it occurs, which is made doubly weird because she is just awakening to her sexual instincts thanks to Zach. I suppose it's entertaining enough, and doesn't really warrant being chucked out the window, but Tess and her whole family are just so annoying. And I never really did care about what happened to The Barn though, you know, points to Vail for having Matt sell if off at the end, even though it made him an environment ruiner. I guess Mother Earth's poontang just can't compete with Joanna Talley's. That said, I doubt I will ever feel the urge to read this book again, in my life. The characters are just too unsympathetic.
Posted by Claire at 7/20/2008 12:46:00 PM

So is your copy for sale? I'm dead serious; I can't find this shit anywhere. piperrhiannon@yahoo.com if you're interested in selling :)

I actually liked this book, but I did read it when I was ten...